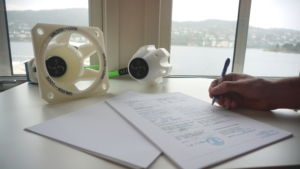 Statoil Norway is driving the initiative in a project whose results shall enable long-term remote operation of underwater vehicles through battery charging and high-bandwidth data transfer via a seabed-based docking station. The ability to charge distributed sensor networks from AUV systems shall also become possible with bi-directional power transfer being developed in the project.

This joint industry project is receiving financial support from the Research Council of Norway and Brazil’s R&D funding body, Finep. The project is led in Norway by WiSub and in Brazil by easySubsea, experts in pinless power and data connections and wireless underwater communication respectively.

Battery life of seabed-based robotics typically does not extend beyond a day or two before requiring recharge. The vast amounts of data collected by an AUV also requires distribution and processing, typically to an on-shore facility for analysis. Connection to an underwater cabled network linking seabed to shore is the primary means to achieve charging and data transfer, however connection systems that employ conductive pins have tight mating tolerances, sealing systems and limited mating cycles. By removing the pins from connections, repeatable reliable underwater connection and disconnection becomes an achievable reality.

“This ambitious project aims to achieve a system-independent standard in AUV connection, bringing the industry one step closer to complete subsea automation,”

“Through such collaboration projects, we accelerate access to and responsible use of our oceans’ vast and valuable resources.”

The Research Council of Norway supports project 262516 under their Petromaks2 funding program. The project runs until December 2018.